As promised I'm back with a load of pictures from our trip to Fredericton New Brunswick.  As I mentioned in my previous post about our trip the weather was beautiful.  One afternoon it was just too nice out to stay cooped up in the house so we headed to a local walking trail it was so beautiful we had such a great day for a walk in the park to observe the beauty of creation.

After our walk Joy said she wanted to bring me out for a treat she wouldn't tell me what it was but kept telling me that I'd love it!  We were on the road for only a few minutes and I saw a store sign for Beaver Tails and immediately said to Joy "oh man you guys have Beaver Tails I haven't had a Beaver Tail in years".  Joy started laughing and said she knew I'd like it because that was where she had planned to take us. 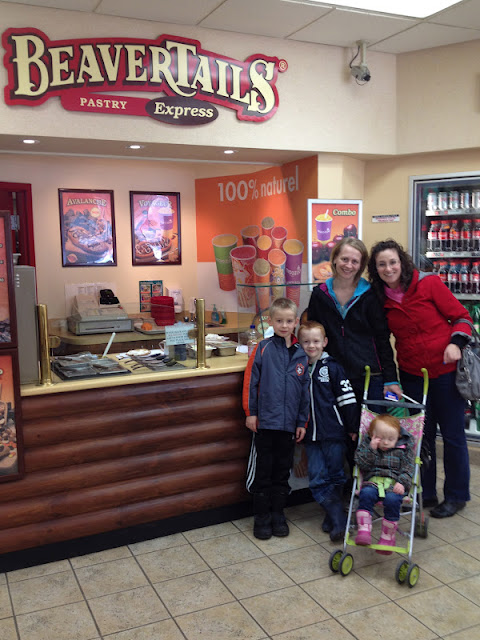 I was so surprised with all the different topping options the kids and Ryan got some crazy fun Beaver Tails topped like Reeses Peanut Buttercups and Skor Avalanche.  They looked so good and they were so fun and messy to eat. 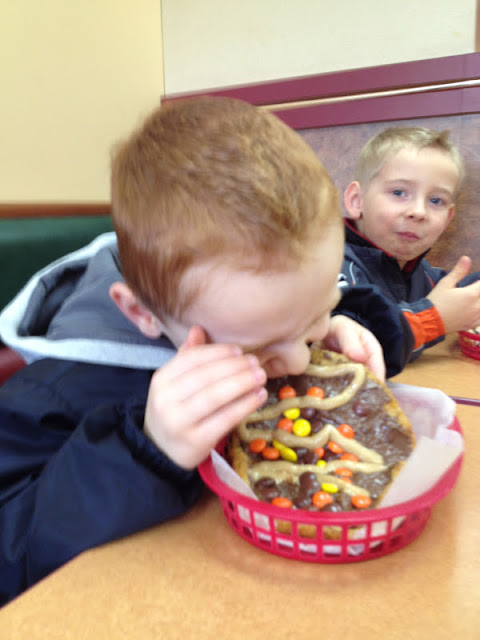 I had the traditional sugar and lemon Beaver Tail and although it's a classic it's so good and I couldn't pass up the opportunity to take a step back in time to the days when I was about the boys age skating on the Ottawa Canal with my dad and enjoying this classic treat. 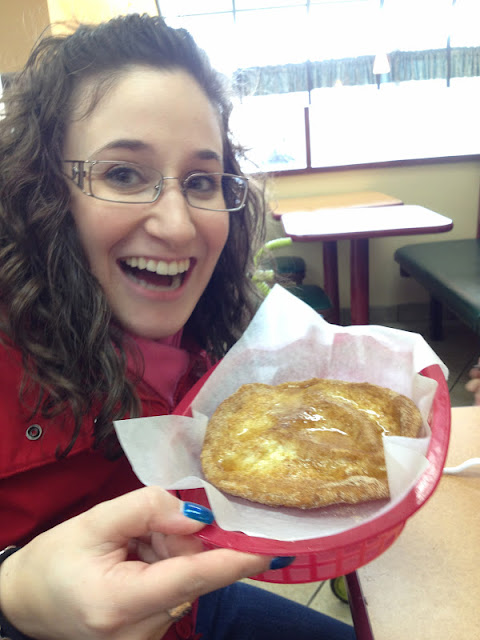 Brent and Joy built a skating rank in their backyard this winter for their boys who both love to play hockey.  When we arrived it was still frozen but throughout the week with the warm weather it started to melt and it was hard to stop the inner child in Joy from going out and splashing in the puddles. 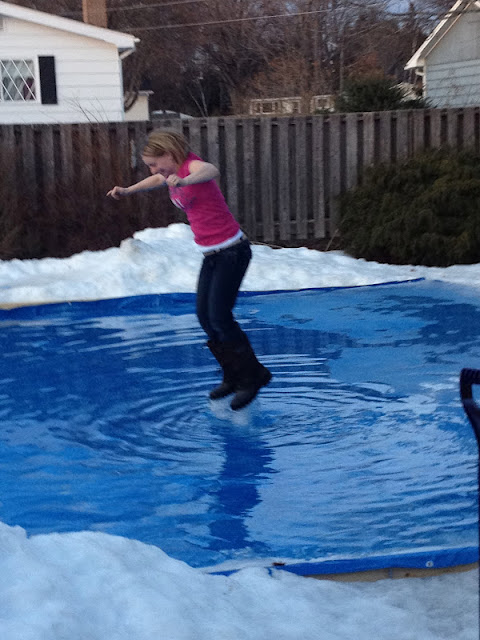 It wasn't long after Joy went out to play in the big puddle the kids got suited up and went out to take part in the fun.  There was lots of splashing and laughing.  And everyone came in soaking wet with boots full of water, it was super fun! 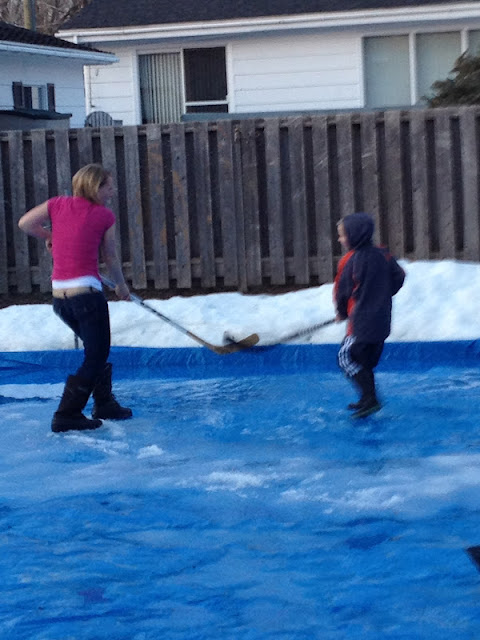 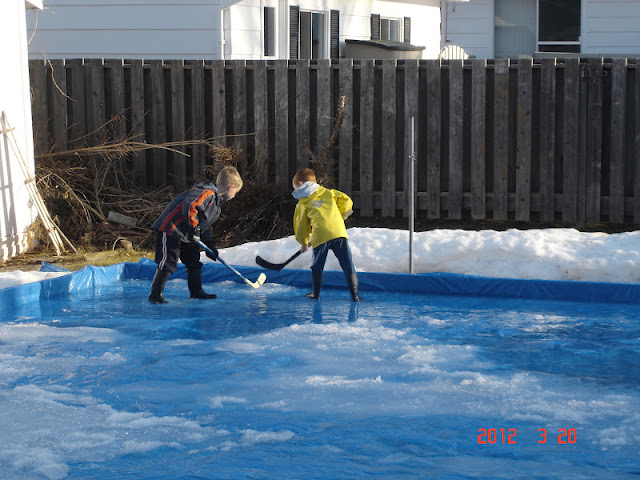 Ryan got the opportunity to tap into his inner geek.  I love my hubby just the way he is and I love when he gets excited about about different things.  Ryan was like a pig in a mud puddle when we stumbled upon a store in downtown Fredericton called "The Geek Chick Boutique".  Ryan was in his glory! 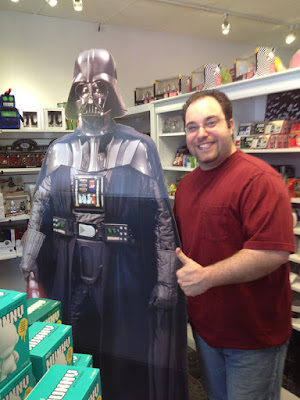 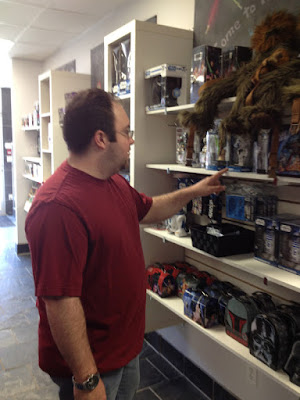 Ryan was also in his glory when the boys asked him to put together one of Lego ships.  Needless to say all the pieces needed for the ship had been mixed together in their Lego stash.  Ryan spent hours trying to put this ship together for the boys.  The boys helped for the first few minutes but quickly became distracted.  Ryan worked and worked and worked and he was determined to complete the ship and he did...ok minus a few pieces they couldn't find :-) Ryan had so much fun he even made a couple of comments about getting some Lego sets of his own.  LOL what a big kid my hubby is... I love him for it! 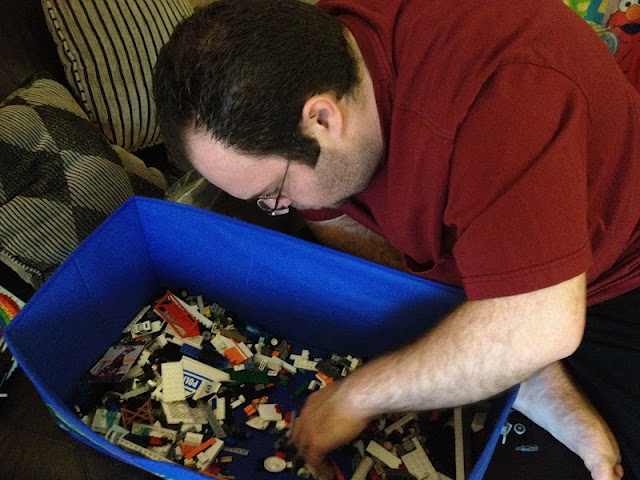 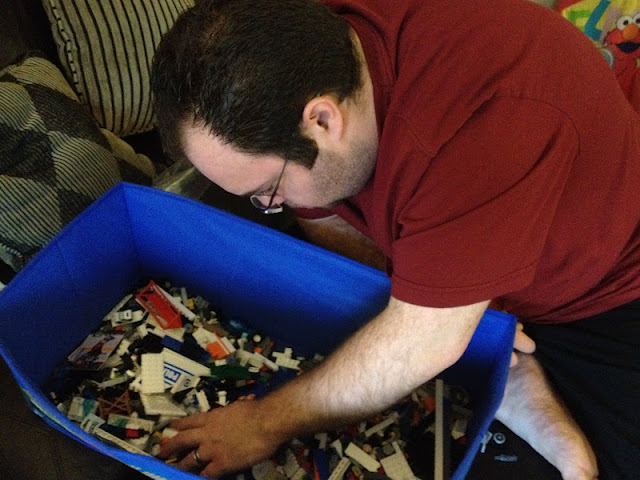 One day we took a little road trip and went to St. John.  Sadly we had to leave Brent and Joel behind because Joel was sick.  We missed them a ton but we had a great time. 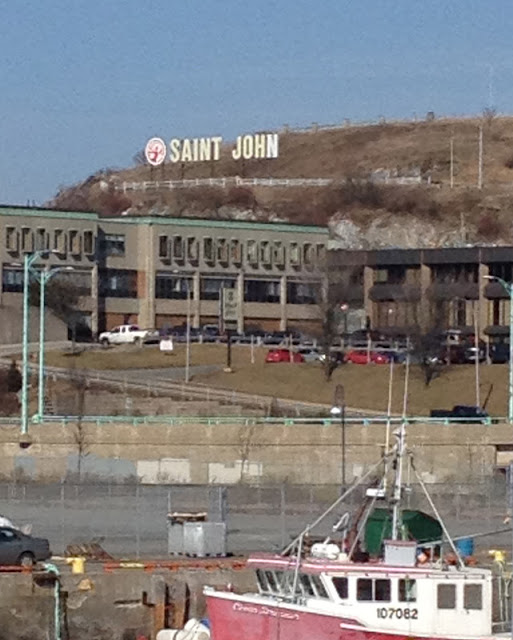 While we were in St. John we took a nice drive by the waterfront to see all the ships, we saw the reversing falls and went to the market.  It was so much fun!  The main reason for our trip was to go to the New Brunswick Museum, we learnt a lot they had some great exhibits about the Province as well as some other exhibits about natural history.  We had lots of fun! 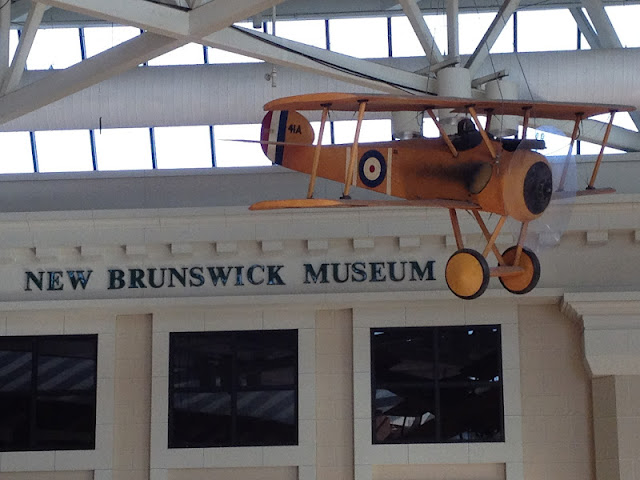 We also spent a good amount of time playing Wii Fit, we are all a little competitive and were having so much fun trying to beat each other's best scores.  It was so much fun. 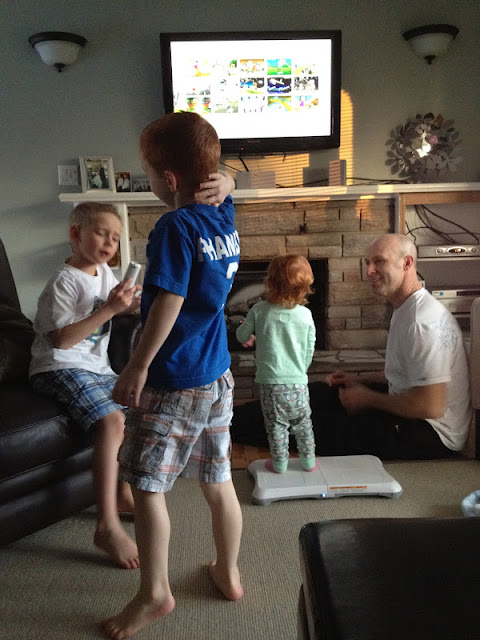 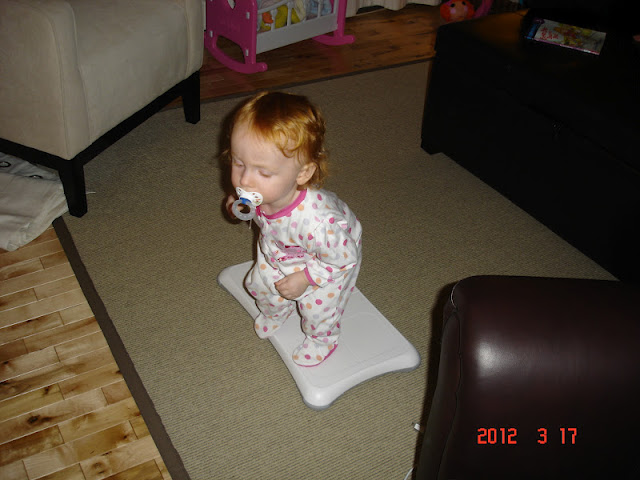 We all tried the bird flying game, I don't remember exactly what it's called, but it was fun!  It was so much fun to play and it was even more fun to watch each other.  See Ryan and Brent...don't they look funny? hee hee it wasn't just them, we all looked that funny! 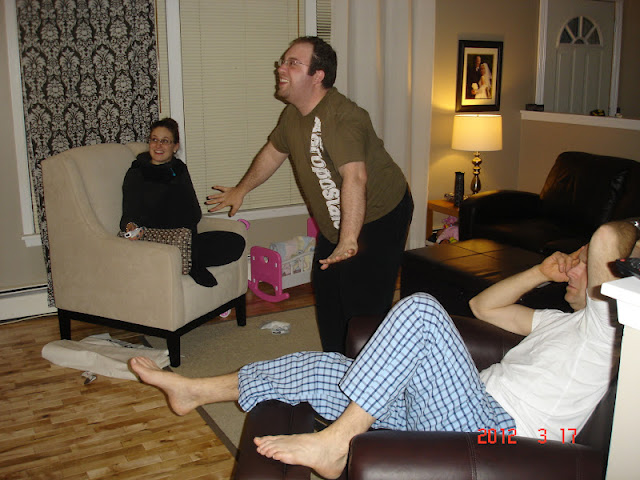 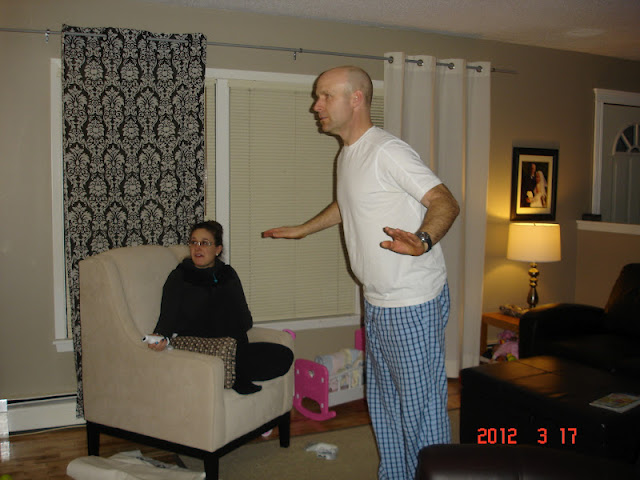 As you all know I love crafts so when we started planning our trip I wanted to plan a fun day for the kids and I was able to find a really cool place called the Clay Cafe.  We ended up speeding an afternoon picking out already formed clay figures and painting them.  The boy's did a great job and I think they had some fun! 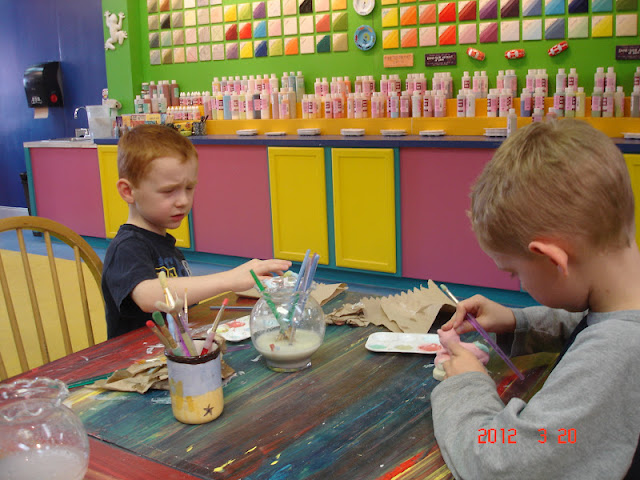 Little Paige wasn't able to paint her own just because she was too young so I painted one for her.  After we were done painting our figures we had to leave them there and have them fired in the kiln so we weren't able to take them home right away and sadly because we left we didn't get to see the finished product, but I am sure the boys did a wonderful job! 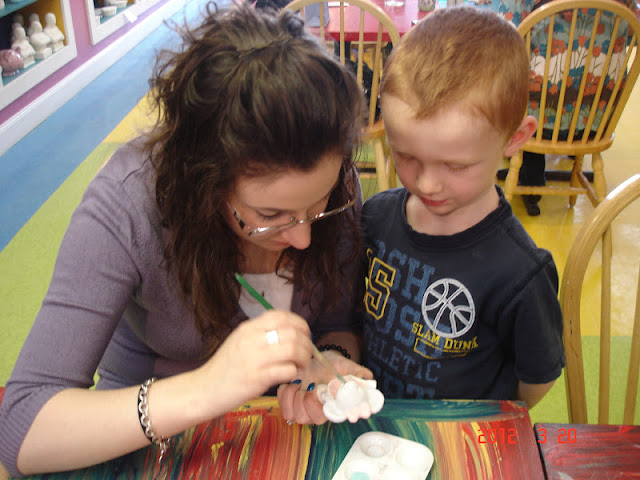 These are just some of the fun things we did while we visited our friends in Fredericton.  We miss them so much already and can't wait to see them again sometimes soon.  I was so happy when Brent and Joy told us that they were going to be coming back to Kitchener area in the summer we are looking forward to another visit when they come.  I think Hubby and I will end up going back to Fredericton again but next time I think we will go in the summer and maybe take in some of the other eastern provinces.
Posted by Christina at 7:00 AM